These are some examples of Henry Wyse’s hand made manuscripts that survive within the family archives.

This small hand illustrated Alphabet book by Henry Wyse, is interesting in that it shows the wide range of ‘marbled’ papers that he produced. His original experiments were made with a machine that looked rather like a cross between a mangle and a printing press. The final papers were printed for him at a local printing press in Edinburgh.

Henry Wyse had a poetic streak, and wrote many pieces of poetry both for the family, and as political comment. This hand illustrated manuscript gives us a taste of the variety of poetry that he wrote.

These nonsense verses were written towards the end of Henry Wyse’s life, and show his interest in world events as they happened during the second world war in the 1940’s. 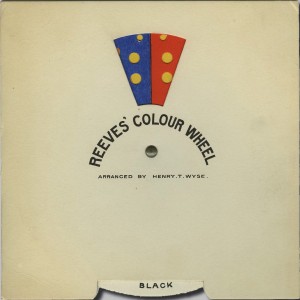 Henry Wyse designed a simple colour wheel which could show how one colour would react when seen in conjunction with another. The final design for the wheel was made and sold by Reeves, the well known artists suppliers. Henry Wyse’s original mock up for the wheel can be seen in the last picture.

Amongst other commissions, Henry Wyse was asked to create murals for the Hotel Italie in Gravedona, Italy. These photographs show the preliminary drawings for the nine panels.

After first publishing this page some years ago, I was approached by the family who now own the hotel in Gravedona, to say they still had the nine panels in storage. They kindly sent me colour photos of the panels, and have allowed me to add them to the display after the black and white photos that I already had. The panels do show signs of smoke damage, from years of visitors to the hotel, but they are now safe, and may be restored at some point.

Henry Wyse is standing to the right of the first photograph