Henry Wyse was interested in the many different forms of media and printing processes. He maintained a well stocked workshop in his attic, from where he used to experiment with such things as the commercial production of marbled paper, ‘harmonograph’ drawings, and even making his own pastels. He also published many instructional books throughout his life, though most were published in the early 1900’s. Some of these books are illustrated on the Publications page. On Illustrated Manuscripts page, you will see some of the hand made illustrated books that remain within the family archives. 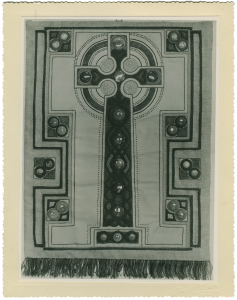 In his last years, Henry Wyse’s designed a cross and pulpit hanging for his local church in Blackhall, Edinburgh. Only a wooden maquette of the cross was ever constructed as far as we know, but the pulpit fall was actually sewn and displayed. Its whereabouts are now unknown.

Embroidery made for Henry Wyse by his daughter, Helann Wannop (née Wyse)

This is an interesting example of one of the many different things Henry Wyse turned his hand to, an illustrated manuscript on bagpipe music that was presented to King George VI.

In the 1930’s, after experimenting with a simple machine in his attic, that involved mangle rollers and corks, Henry Wyse designed a machine to print the marbled papers you will see in many of the examples in this archive. Marbled paper went into production during the late 1930’s at a print factory in Leith. He took out a patent for the machine in both the British Isles and Canada. This is an extract from the patent application he submitted.

The full patent applications can be viewed from these links: